After community divide over patch, Mount Prospect police find cause to unite behind


A year after controversy over the Mount Prospect Police Department uniform patch deeply divided community leaders and residents, police officials have put a postscript on the saga that everyone should be able to get behind.

Officials announced this week that they’re donating $23,391 from sales of the decommissioned shoulder patch to the 100 Club of Illinois. The organization provides resources, financial assistance and other support to the families of Illinois first responders killed in the line of duty.

“Chief (John) Koziol came up with the idea of putting patches up for sale and turning it into a donation to a worthwhile organization like the 100 Club of Illinois,” officer Greg Sill told us Thursday.

Koziol pitched it to the rank-and-file, who bought in.

“We want to continue to live our mission, which is, ‘With courage we protect, with compassion we serve,'” Sill said. “And this goes to that point of that second part of the statement, where we want to take care of our community, we want to take care of our fellow officers and their families. And that’s really what we wanted to focus on, making sure that we could take something and make it as best as we could.” 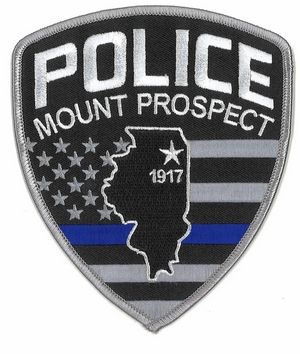 First introduced with little fanfare in 2018, the patch features a black-and-white American flag with a single blue stripe. For police, the “thin blue line” imagery is a tribute to law enforcement officers who’ve lost their lives while serving.

But in the wake of George Floyd’s killing by a Minneapolis police officer in May 2020, and the protests and civil unrest that followed, some in Mount Prospect called for the patch’s removal. The blue line imagery, critics said, had been co-opted by white nationalists and other extremist groups, and its use by Mount Prospect police was intimidating to minority residents. 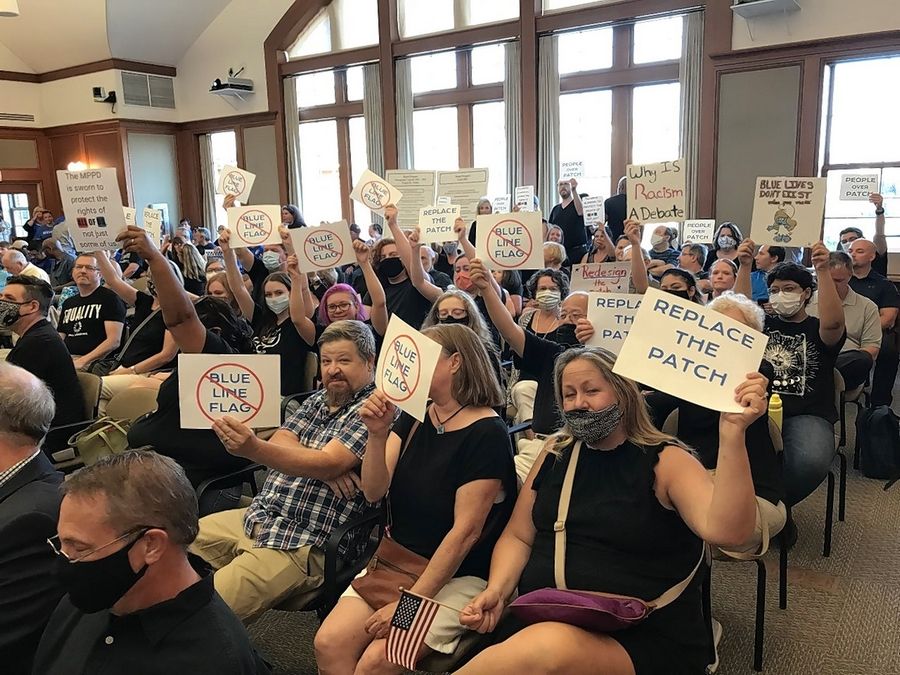 Months of public meetings and debate, not to mention coverage by national outlets including Fox News, all came to a head in August 2021, when a split village board voted 4-3 to call for the patch’s removal.

Though stung by the decision — police leaders and officers were among the patch’s outspoken defenders — the department decided to turn lemons into lemonade. In November, the department announced on its Facebook page that it was selling the decommissioned patches: $10 for silver, gold and community service officer editions, or $15 for an honor guard version. Sill didn’t know Thursday exactly how many patches sold. But $23,391 divided by $10 to $15 apiece equals hundreds of patches.

“We’re very grateful for the community support and for those that wanted to purchase the patch to be able to allow a donation to the 100 Club of Illinois,” Sill said. “I wouldn’t say that we were surprised, but we’re humbled that people wanted to give to this good organization.”

Which scam is worst?

From phishing emails to phony IRS calls to online romance and shopping scams, we write often here about how fraudsters are working overtime to separate you from your money and what you can do to stop them.

But have you ever wondered which scams are the worst? The Better Business Bureau did, and this week it released its list of the scams that pose the biggest risk to consumers.

Part of the organization’s 2021 BBB Scam Tracker Risk Report, the list is topped by online purchase scams, which became especially prevalent over the past two years as we all did more shopping from home during the pandemic. Online scams were more likely to result in a reported monetary loss than scams committed in person or by phone, with nearly 75% of the people who reported an online shopping scam having lost money, the report states.

Cryptocurrency scams ranked second, and they proved especially costly for those between 25 and 64 years old. The average loss from a cryptocurrency scam was $1,200, much higher than the median loss of $169 for all scams.

Rounding out the top five scams of the year were employment, home improvement and investment scams.

If you have spotted a scam, whether or not you fell victim, you can report it at BBB.org/ScamTracker. A report helps expose scammer tactics and boost consumer awareness.

Days after appearing in a DuPage County courtroom to admit to charges he defrauded customers out of thousands of dollars, an Elmhurst business owner was in a Cook County courtroom repeating the feat.

“Edmund Kavanaugh has a long history of scamming and defrauding the residents of Cook and DuPage counties, and today’s sentence will help prevent him from preying on any residents in the future,” Illinois Attorney General Kwame Raoul said in announcing the plea Thursday.

Kavanaugh owns and operates a home repair business named Goliath Construction. Charges filed last year alleged he engaged in various schemes that involved him being hired for home repair jobs and collecting payment, but failing to complete any of the agreed-upon work.

• Have a question, tip or comment? Email us at copsandcrime@dailyherald.com.

It turns out our state is a place to be