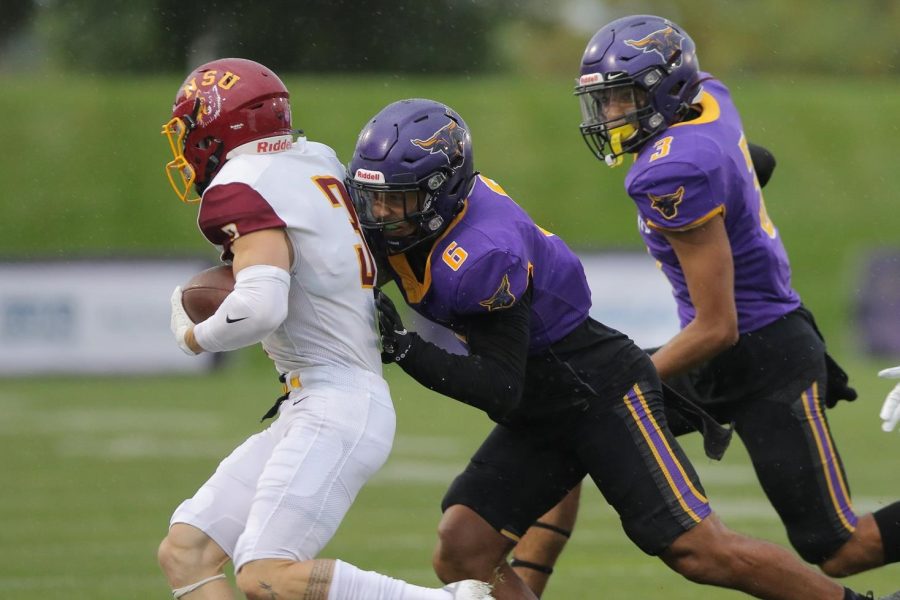 As the Illini prepare for the start of the upcoming season, the defense is focused on incorporating more new faces into their schemes than last year.

The strength of the 2021 roster was the defense for a unit that allowed 20 or fewer points in seven of its 12 games. The Illini restocked their defense with young recruits and transfers who will be called upon to step up after losing six key players to the NFL this spring. Eight freshmen will join the team this fall, with some talent at the top that can contribute right away if needed.

The highest-ranked defensive recruit in the class is Jared Badie, a 6-foot-5-inch linebacker from Oswego, Ill. Badie arrived on campus early and has already been focused on building a good program for himself with the coaches.

“The strength staff has definitely done a great job of walking me through the process of putting on weight … getting the right stuff in my body,” Badie said.

Badie believes he is benefiting from the early practices, watching the other players go through drills, paving the way for freshmen like Badie to learn the ropes.

“It’s just an opportunity to learn the system — learn how the guys carry themselves and seeing the scheme,” Badie said of his early preseason workouts.

The freshman acknowledges that learning a Big Ten defensive playbook isn’t easy, but he is enjoying the work and relationships he has made in his first months on campus.

“We’ve been able to create a brotherhood, a real family,” Badie said. “I didn’t think that I’d have so many friends, but we’ve gotten so close.”

The one position not addressed in the recruiting class was along the defensive line, bringing head coach Bret Bielema to fill that position through the transfer portal.

Senior Raashaan Wilkins transferred from Vanderbilt, where he stayed two seasons, started 19 of 21 games he played in and totaled 21 tackles and 2 tackles for a loss in his most recent season. Wilkins will also be joined by junior Terah Edwards, transferring in from in-state rival Northwestern after only playing in three games last season.

The duo will bring depth to the position that the Illini need and will hopefully be able to contribute to a group that shined a year ago.

Terrell Jennings is the final transfer on the defensive side of the ball as the junior recorded 19 tackles, one interception and four pass breakups last season as a defensive back at Minnesota State University. While these 11 players are all new faces to the program this year, other Illini will join the group as new faces to the field.

Former four-star outside linebacker Alec Bryant sat out the 2021 season due to NCAA transfer protocol but will be ready for the 2022 season. Bryant has a lot of potential and hopes to be a key figure in the defense after having more than a year to showcase his talent.

Another outside linebacker without much field time is CJ Hart, who got injured early in the 2021 campaign. Hart had six tackles, one sack, and a touchdown in his only game with the Illini last year and is poised for a breakout season now that he is healthy.

Although the Illini lost a lot, the recruits, transfers and players already on the roster have the potential to mold themselves into a unit similar to last year and become a winning football team in 2022.