Illinois travels to Nebraska for another Big Ten West challenge 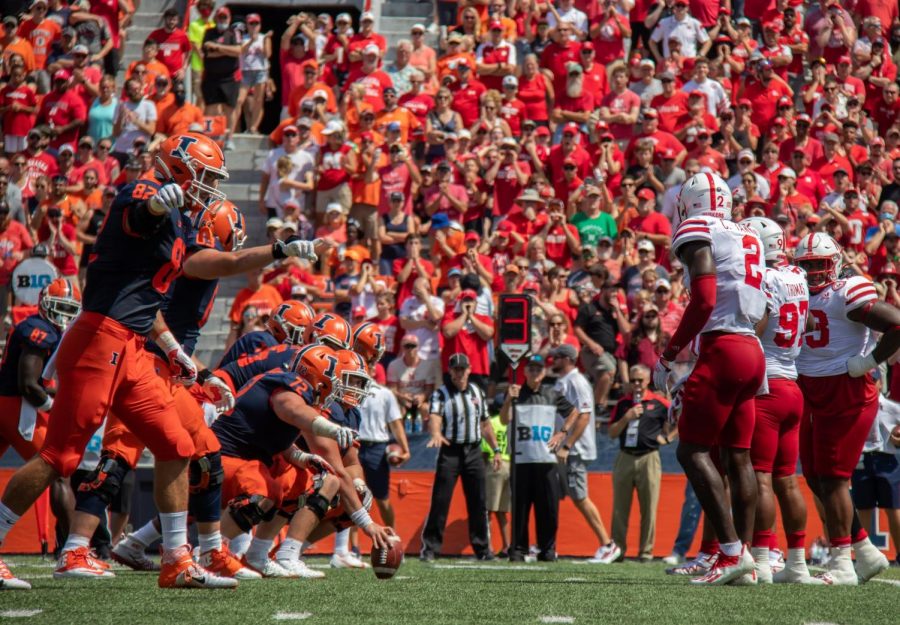 Illinois gets set at the line of scrimmage before a play against Nebraska on Aug. 28, 2021.

Entering week nine, the Illini stand alone atop the Big Ten West and another win would go a long way towards a division crown. Despite the Cornhusker’s struggles, they are not an ordinary 3-4 program, with plenty of talent to put up a fight.

Former ‘Husker head coach Scott Frost recruited the seventh-best transfer recruiting class before the season, according to 247Sports, but a 1-2 start was the final straw for Frost and current interim coach Mickey Joseph replaced him earlier this season. The Huskers are 2-2 since the change, showing minor improvements from early on.

“They’re a very talented football team and have a lot of athletic ability on the perimeter, on both offense and defense. They’ve got big guys up front who play physical Big Ten football,” head coach Bret Bielema said. “A tremendous challenge for us.”

Junior transfer Casey Thompson leads the offensive unit, averaging nearly 30 points per game and a passing attack that will be the best to face the Illini since Indiana. While that says more about Illini opponents during that span, the Huskers are explosive at times which will test the Illini secondary.


Pro Football Focus ratings have junior transfer wide receiver Trey Palmer as their No. 1 receiver in the country through seven weeks, averaging 111 yards per game and 16.6 yards per reception. The Huskers are fortunate the chemistry between Thompson and Palmer has been excellent, considering both transferred just this season, as the tandem has been one of the few bright spots in a tumultuous season.

“That is the challenge is limiting the explosive plays. They’ve made their money on those, especially here lately,” defensive coordinator Ryan Walters said. “We’ll have our hands cut out for us, for sure.”

While the passing game has kept the team afloat, it hasn’t been immune to struggles, with Thompson throwing eight interceptions. Add four fumbles to the turnover count and it becomes clear why the Huskers consistently trail their opponents.

Another reason for their struggles is a defense that can’t find its footing. Allowing 471 yards per game, 190 of which are on the ground, is not a recipe for wins. The Huskers have had no answer for opposing rushing attacks and it won’t get any easier this week.

Even following the bye week, junior running back Chase Brown still leads the nation in rushing yards and is poised for another big game. Brown has been the focal point of the Illini offense this season and no one has been able to stop the back even when they know he is coming. The Illini will have their complete collection of rushing weapons when they arrive at Memorial Stadium with sophomore Josh McCray returning to bolster their run-first offense.

It will also be a big game for the Illini defense, with the group No. 1 in lowest points allowed and No. 1 in fewest yards allowed per game this season. The Huskers will test a group that hasn’t seen a consistent passing offense since Indiana, but their weaknesses play into Illini strengths.

The Illini have intercepted at least one pass in their past ten games and defensive coordinator Ryan Walters has set his defensive backs up for success this season. Communication has also been a strength of the Illini defense this year and will be vital on Saturday with a massive crowd.

The Husker faithful are known for selling out Memorial Stadium and around 86,000 will make for a harsh environment for the Illini. An early lead would help take the crowd out of the game and the Illini had their extra week to formulate a game plan to do just that.

“I really enjoyed the tenacity of the environment we played in,” Bielema said. “It’s a very vertical stadium. A lot of people. Very interactive crowd and one I’m excited to let our guys play.”

The Huskers hope that two weeks was enough preparation to slow down one of the top rushing attacks in the country, while Brown and company are looking for yet another big day with first place in the division on the line.

The good, the bad and the very ugly games