Judge ’s mission is simple as her confirmation hearings to become on the U.S. Supreme Court start Monday: Don’t fall for the traps.

Jackson, 51, will spend three days testifying before the Senate Judiciary Committee, playing her role in what President , a former chairman of that panel, once called a “kabuki dance.” Like past nominees, Jackson in all likelihood will seek to skirt controversy and resist attempts to pin her down on divisive issues that might come before the court, such as gun rights and affirmative action.

Jackson has successfully navigated the process before. Last year she won confirmation to be a federal appeals court judge in Washington and in 2013 she was approved to be a district judge. But the stakes have grown, and Republicans, many still rankled by contentious hearings for former President ’s Supreme Court nominees, may try to trip her up on key election-year issues like crime.

Her supporters say they expect Jackson to show a mastery of the law that will carry symbolic importance and of her.

“It’s important for the nation to witness this incredible display of excellence from this candidate who emerged from many other exceptional and highly qualified Black women,” said , president of the NAACP Legal Defense Fund.

With Democrats solidly behind her nomination, Jackson has the votes she needs to win approval in the 50-50 Senate, where Vice President can cast the tie-breaking vote if needed.

Republicans have all but conceded she will get confirmed, signaling they will focus on laying groundwork for the November election, in part by questioning Biden’s commitment to law and order. GOP senators say they will probe Jackson about her work as a public defender and her representation of alleged terrorists held at the U.S. naval base at Guantanamo Bay, Cuba.

, who served on the U.S. Sentencing Commission with Jackson, called Hawley’s criticisms “ridiculous,” saying on Twitter they center on a unanimous commission report and practices widely used by federal judges in child-pornography cases. 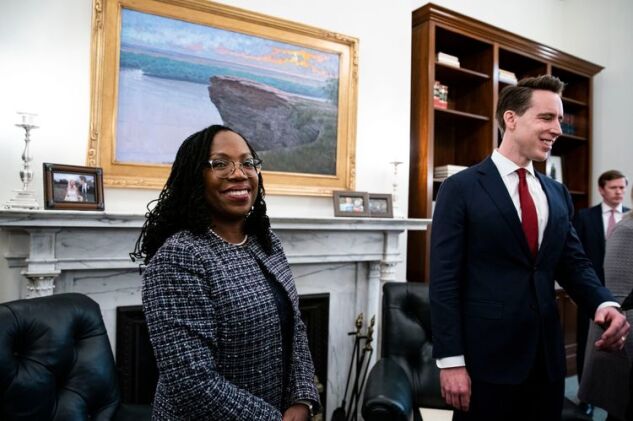 Democrats are vowing to defend Jackson from such attacks. They want to help highlight her strongest attributes, including the new perspectives she would bring to the Supreme Court.

“In trial terms, she is my client and she is my witness,” said Senate Judiciary Chairman of Illinois.

Supreme Court nominees have chosen their words carefully since ’s failed 1987 nomination — the last time the Senate outright rejected a president’s pick. Bork, who had previously criticized the Roe v. Wade abortion-rights ruling, famously testified that serving on the Supreme Court would be an “intellectual feast.” He advocated for the “originalist” approach of constitutional interpretation that advocates hewing to the understanding of text at the time it was adopted.

During her 1993 confirmation hearing, told senators she would offer “no forecasts, no hints” about issues that might come before the court, setting a standard that has come be known as the “Ginsburg rule.”

invoked Ginsburg’s words after being nominated by Trump to fill the recently deceased justice’s seat just weeks before the 2020 presidential election. Barrett ducked questions about abortion, gay marriage and the Affordable Care Act at her Senate hearing.

“Senator, I completely understand why you are asking the question,” she said when Senator of California asked about overturning Roe. “But again, I can’t pre-commit or say, yes, I’m going in with some agenda, because I’m not.”

Jackson has her own track record of being circumspect. When the Senate considered her nomination to the U.S. Court of Appeals for the D.C. Circuit last year, she said in a written response to questions that “I do not have a judicial philosophy per se.”

She said that, as a sitting judge, she had “a duty to avoid commenting on, or providing personal views of, disputed legal matters such as the most appropriate method of interpreting the Constitution.”

, director of the Meese Center for Legal & Judicial Studies and Senior Legal Fellow at the conservative Heritage Foundation, called those responses “shocking” and “silly” given Jackson’s experience, which includes nine years as a federal judge.

“I think it is very fair game to try to pin her down on that,” Malcolm said. “And if she is evasive, you can either come to the conclusion that she’s not telling the truth, or she hasn’t been thoughtful enough as a judge.”

Supreme Court hearings at times have gotten so nasty they are remembered more for their fiery exchanges than any substantive discussion of constitutional law. In his 2018 hearing, gave an angry and tearful denial of allegations that he committed sexual assault as a teenager, calling them “a calculated and orchestrated political hit.”

In 1991, denied sexual harassment allegations against him and blasted the hearing as “a high-tech lynching for uppity blacks who in any way deign to think for themselves.”

But , a former Republican chief nominations counsel on the Judiciary Committee, said he expects Jackson’s hearings to go smoothly based on the reviews of her private meetings with senators since the nomination.

“There aren’t reporters or cameras in those rooms, but all reports you hear in Washington are that they’ve gone very well,” Nunziata said.

Jackson, who also won Senate confirmation for her seat on the Sentencing Commission, will benefit from her experience with the process, said said , president of the National Women’s Law Center.

“She’s someone who is so eminently qualified and widely respected, it’s really hard to imagine how people don’t support her as the nominee,” Goss Graves said. “And so from that perspective, I feel like she’s going into this hearing with a lot of wind at her back.”

To contact the author of this story:
in Washington at gstohr@bloomberg.net

To contact the editor responsible for this story:
at ewasserman2@bloomberg.net

MLB pitchers are turning to sliders more than ever