Meet the Winner of HP’s Girls Save the World Challenge


When HP, Inc. put out a worldwide call last fall for girls ages 13 to 18 to submit innovative ideas about how to address an environmental or social issue in their community, more than 800 applications poured in from 148 countries.

With its Girls Save the World challenge, HP awarded the grand prize to the development and implementation of: Etana, a low-cost, solar-powered fingerprint scanner that provides women in developing nations with a digital proof of identity even if they don’t have access to the Internet or electricity.

Elizabeth Nyamwange, 16, from Byron, Illinois, had developed a gender-equality-meets-blockchain-technology and was looking for funding prior to hearing about the program. “I was so surprised that I won,” Nyamwange says. “It was a shock for me because I wasn’t positive if it was ever going to happen because I didn’t have the funding for it. I’m really, really grateful.”

Currently, women make up 28% of the STEM workforce.

The concept of the digital identification gap women in developing nations face, which limits their access to such important resources as judicial protection, health care, and banking, intrigued Nyamwange because of her relationship with her family in Kenya. “I’m really close with my family over there, especially a lot of the girls, and talking to them is a big part of where this idea came from,” says the first-generation American who attends the Illinois Math and Science Academy in Auora.

When she researched the topic, she learned there were other tech companies focused on solving these identity issues, but their solutions required users to have access to WiFi. She knew this was an obstacle that needed a workaround because that technology isn’t readily available everywhere. So, she wrote the code for Etana, which converts a physical fingerprint into a mathematical algorithm that uploads to a private blockchain server where it is stored and used as identification.

As Nyamwange explains: In countries that use digital identification, the only verification you need at places like banks and hospitals would be the biometric footprint—something that does not change over time like fingerprints, iris recognition, facial recognition, voice, etc. “It’s quite different than how identification operates in the US, but it’s prominent in other countries, including Kenya,” she says.

Nyamwange will use her $10,000 winnings and technology pack from HP to further develop her project, including designing a prototype of the physical device that captures a fingerprint and uploads it to a blockchain network, and launching a pilot program in Kenya later this year. After her upcoming senior year of high school, she plans to double-major in computer sciences and sociology, with dreams of starting her own tech company that centers around gender inclusivity. 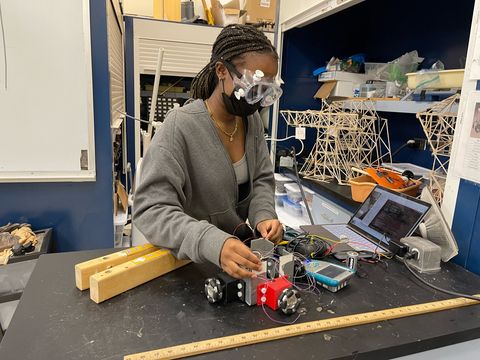 Nyamwange working on Etana, a solar-powered device that helps make digital identification accessible to women in countries like Kenya.

In addition, 10 finalists each received grant funding as well as mentorship from HP and its campaign partners, including MIT Solve, Girl Rising, The Female Quotient, and Conservation International. The finalists also received a sustainable technology pack from HP, which includes an Elite Dragonfly, the world’s first laptop made with ocean-bound plastics; a printer with an Instant Ink subscription that contributes to HP Planet Partners through the reuse and recycling of printer cartridges; and a supply of HP brand paper that contributes to forest protection and restoration.

STEM Is for Girls

The success of the Girls Save the World Challenge was in part due to actress and environmental activist Miranda Cosgrove’s dedication to encouraging submissions. “I think what HP is doing is really amazing, bringing so many young girls together who want to be a part of making the world a better place,” says Cosgrove, who executive produces and hosts a show dedicated to highlighting women in STEM (Science, Technology, Engineering and Math) fields.

Currently, women make up only 28% of the STEM workforce, and men far outnumber the women majoring in STEM in college. It’s crucial to find ways to break down the barriers that prevent girls from pursuing STEM education and careers—such as fewer role models inspiring interest in these fields, a confidence gap in math and related studies, and pervasive gender stereotypes.

“It’s really important for young girls to know all the different options that are out there,” says Cosgrove, who knows from personal experience how getting involved with something at a young age can have a big impact on the rest of your life (she started acting at 5 years old). “If girls can start learning about different jobs in the STEM fields, that’s going to stick with them. And hopefully, once they get older, they’ll want to be a part of the STEM world.”

“I have so much hope for the future,” Cosgrove concludes. “I feel like young women, in particular, can bring so much to the table. And, after seeing all these submitted ideas, and how young some of the people are, I can’t even imagine what they’re going to come up with to help the world in the future. The whole thing was really inspiring.”

CUB RELEASES TIPS ON PREPARING YOUR HOME FOR OUTAGES