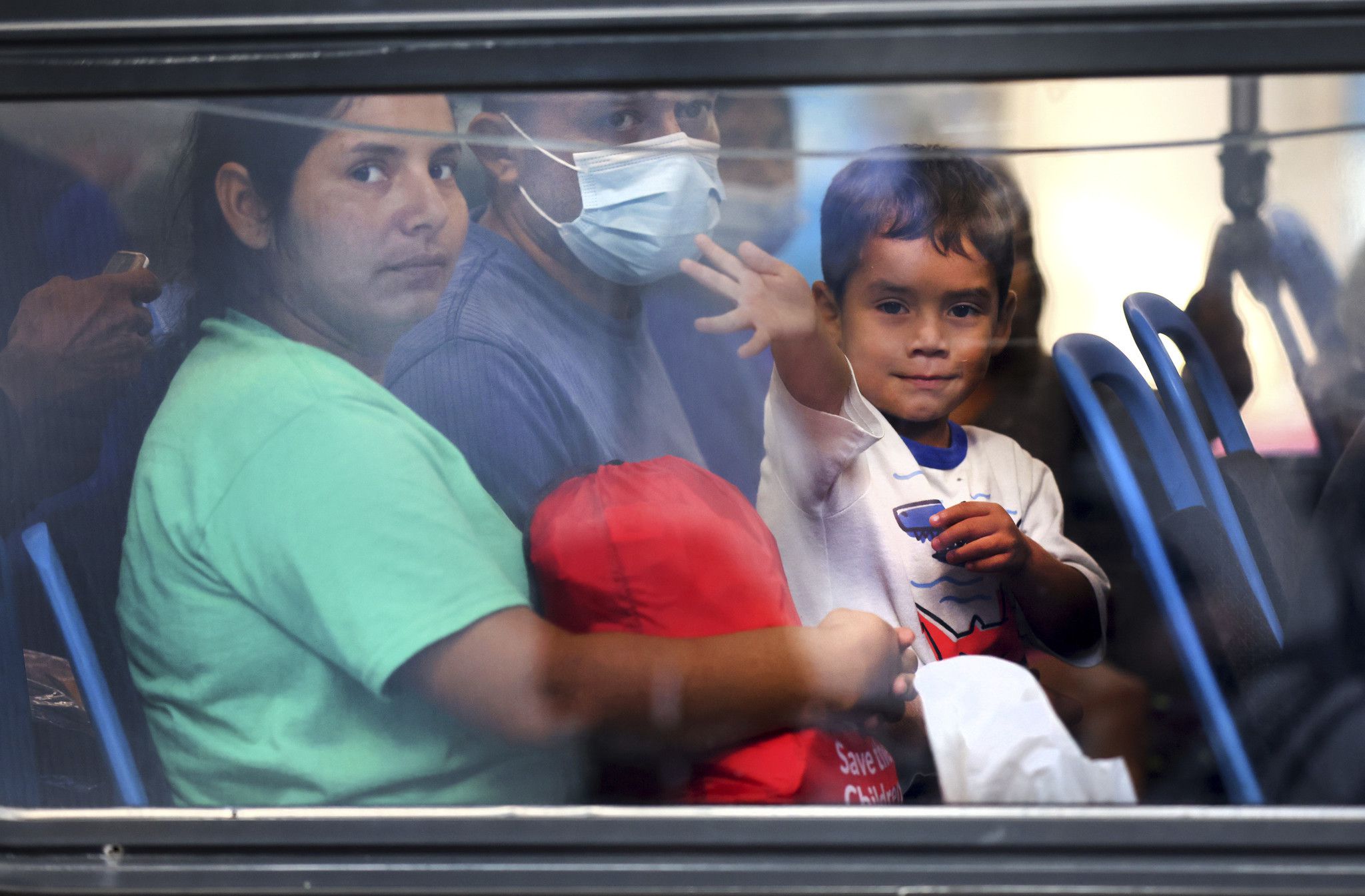 The strain on Chicago’s resources from a continued influx of migrants was underscored this week when Mayor Lori Lightfoot asked the state for $54 million in emergency funding and her administration confirmed it will open a shelter at a former school in Woodlawn to temporarily house asylum-seekers.

Since the first bus arrived from Texas in the fall, nearly 4,000 asylum-seekers have turned up in Chicago from Texas and another 1,400 from elsewhere. About 1,500 remain in the city’s care, officials said. The city has set up 11 shelters to house, clothe and feed migrants and provide other services, costing the city an estimated $7 million in December alone, Lightfoot wrote in a letter to lawmakers, sent after state officials said they plan to cease financial assistance to the city for the migrants at the end of January.

In the state officials’ letter, leaders from the state’s emergency management and human services offices told the city they “have exhausted all available fiscal resources for the operation of the asylum-seeker mission,” and are requesting more money from the Illinois General Assembly that, if approved, will cover state “costs related to hotels and decompression, the establishment of Intermediate Congregate Housing (ICH) facilities to serve families, and other basic supports for asylum-seekers in ICH and hotel settings through the remainder of State Fiscal Year 2023,” which is June 30.

But even with supplemental funding from the legislature, the state said funding to the city is slated to end by Jan. 31.

[ Lightfoot asks for tens of millions more in state money for migrants, citing arrivals from Texas; state says funding will cease in January ]

To help make up the difference over the subsequent five months, Lightfoot asked state lawmakers from Chicago to push for $53.5 million more to cover what the city expects to spend through June 30, an amount that “will only increase based on the number of new migrants that arrive in Chicago.”

She said the city has made its own “multimillion-dollar investment” in help for migrants; “however, these funds without state assistance will not be nearly sufficient to address this ongoing need.”

Reaction to Lightfoot’s request from Democratic leaders in Springfield was mostly tepid.

In a statement, Gov. J.B. Pritzker’s office noted the state has already spent $120 million to support asylum-seekers but said state officials are working with the Lightfoot administration to “transition from emergency operations” to building a capacity “to handle these critical operations in a streamlined and efficient manner.” Pritzker’s office also signaled that federal funds could help Chicago with its influx of asylum-seekers.

“Our administration is pleased that additional federal funds were included in the latest spending bill signed by President (Joe) Biden and the state will apply for those dollars as soon as possible,” said Jordan Abudayyeh, a Pritzker spokeswoman. “The Governor looks forward to productive conversations with the General Assembly on how best to ensure Illinois remains a welcoming state.”

Jaclyn Driscoll, a spokeswoman for Democratic House Speaker Emanuel “Chris” Welch, said in a text message that “we are reviewing” the mayor’s request, while Illinois Senate President Don Harmon’s spokeswoman, Liz Mitchell, said Harmon “will be discussing it with members of the caucus.”

State Rep. La Shawn Ford, a West Side Democrat, said that while the legislature “cannot ignore the mayor’s request,” it would make sense for city and state officials to also ask the federal government for help.

“Anytime you are asking for this type of money, you have to talk to the mayor and find out exactly how long does the ($54 million) last? Do we have a plan to get federal funds to deal with this federal problem?” Ford said. “I think that meeting with the president and the congressional delegation should be in order.”

While acknowledging it’s a humane gesture to welcome migrants and asylum-seekers, especially in a “sanctuary city” like Chicago, Ford said he doesn’t think the mayor fully thought through the impact it would have on the city.

“There should’ve always been the understanding that there’s going to be a cost to it, and I think that may have been ignored,” said Ford, who ran against Lightfoot for mayor in 2019.

The migrant influx has been sparked in large part by Texas Gov. Greg Abbott, a Republican, who has sent busloads of migrants who crossed the border into Texas to sanctuary cities such as Chicago to push back against federal immigration policies. The move has been criticized as inhumane by Democrats and mayors, including Lightfoot.

Ald. Byron Sigcho-Lopez, 25th, said the Chicago City Council’s Latino Caucus was not aware of potential funding cuts and that the caucus will also encourage the city to reach out for federal aid and other assistance.

“If we continue to see an influx of migrants — as is expected — what do we do? The response, as it is, is inadequate,” he said.

As the debate continued over funding, a city spokesperson confirmed plans “to utilize space at the former Wadsworth Elementary School for temporary shelter” for asylum-seekers, a move that caught the alderman of the ward where Wadsworth is located off guard.

CBS-2 reported earlier this week that the city has been renovating the school at a cost of $1.5 million, even though the city had been denying it was planning to use it as a temporary migrant shelter.

On Friday, city officials, while confirming the report, did not answer questions about why the building that used to house Wadsworth was best suited for being a shelter or when the migrants might be taken there. They did say the city would continue “to explore all viable options for temporary shelters to respond to emergent needs for new arrivals as it sees fit.”

Ald. Jeanette Taylor, 20th, said Lightfoot’s administration has not been transparent about the plans for Wadsworth with neighbors, who are concerned about safety, access to nearby resources. Woodlawn is a majority-Black community, and Taylor said community organizations that could better help migrants are in nearby neighborhoods such as like Back of the Yards and New City.

“We’ve got homeless people in our ward we need help with,” Taylor said. “It’s not ‘one or the other,’ but you don’t push this on people. You have conversations, planning, you reassure folks you represent. … You wouldn’t pull this in Hyde Park.”

Taylor said asylum-seekers could move in as soon as Friday, Jan. 6.

Migrant advocates have said a lack of funding for foster shelters and immigrant resources could lead to a crisis of migrants not having a place to live.

Erendira Rendon, the vice president for the Immigrant Advocacy and Defense Project at Chicago’s Resurrection Project, said “the state needs to help the city to ensure that these migrants have a place to sleep.”

Rendon, who has been at the forefront of efforts to welcome the migrants to Chicago, said news of a funding cutoff is concerning because more than 100 migrants have arrived on their own from the Texas border.

That number “mainly has to do with word-of-mouth,” she said, meaning the actual number of migrants coming to Chicago may be much larger than the recorded number. Many knock at the doors of nonprofits like the Resurrection Project looking for help, she said.

Though Federal Emergency Management Agency funding for the migrants increased, Rendon said it may not arrive fast enough, and the federal government “needs to step up and do more.”

Earlier this month, political leaders applauded $800 million in new aid for asylum-seekers. The new grant program is to be administered by FEMA as grants or other cooperative agreements with state and local governments, including up to $50 million to build or expand shelters.

While most migrants arrive in the city, many are transported to state-run shelters after they are processed, Rendon said. The city has been mainly responsible for adults without children, while the state takes families, seniors and people with disabilities, she said.

The funding is essential to ensure that facilities are fully staffed and that migrants receive the food and resources they need, Rendon added.

Rendon said that a collective of advocates and community and city leaders will meet with state partners to continue to advocate for the basic needs of new arrivals, including health care screenings and shelter.

Fasika Alem, the programs director at United African Organization, said she worries the cuts will mean fewer resources for Black asylum-seekers. More than 100 migrants from Haiti and parts of Africa have been arriving to the city over the past month, but unlike the other asylum-seekers sent on the buses, Black asylum-seekers have been excluded from the support provided by the state, said Alem.

Some of them have been sleeping in trains and under bridges because the state has not allowed them to stay in the hotels that have been turned into shelters, she said.

“I think that expecting community based organizations to do this work is unrealistic,” Alem said. “We are concerned about what this work is going to look like going forward.”

Are RVs Allowed In HOV Lanes And Left Lanes?