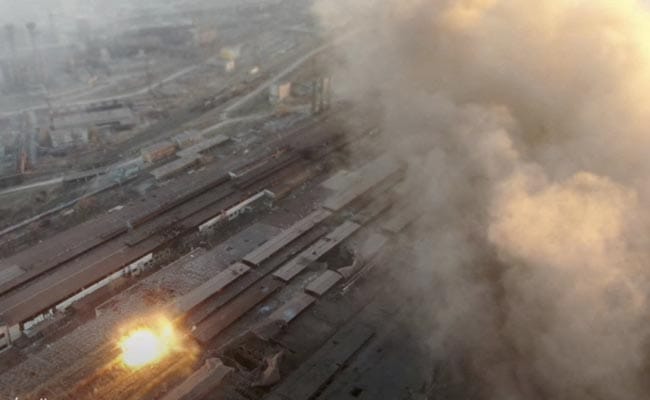 Russia-Ukraine War: Mariupol has been encircled and shelled by Russian forces since February.

“There will be battles ahead. We still need to go down a very difficult path to get everything we want,” he said.

US also said that Russia is refocusing its military efforts on the Donbas region which could herald a “longer, more prolonged conflict”.

US President Joe Biden says that Russian counterpart Vladimir Putin may be “isolated” and could have placed some of his advisors under “house arrest”.

NATO warned that it is not seeing a pull-back of Russian forces in Ukraine and expects “additional offensive actions”.

Ukraine’s government has sent 45 buses to evacuate civilians from the besieged city of Mariupol, where Russia has declared a local ceasefire following a global outcry over the suffering of civilians trapped by a month of relentless shelling.

Here are the LIVE updates on the Ukraine-Russia War:

Get NDTV UpdatesTurn on notifications to receive alerts as this story develops.

Russia-Ukraine War: UK Says Ukraine Has Retaken Villages Of Sloboda, Lukashivka
British military intelligence said on Friday Ukrainian forces have retaken the villages of Sloboda and Lukashivka to the south of Chernihiv and located along main supply routes between the city and Kyiv.

“Ukraine has also continued to make successful but limited counter attacks to the east and north east of Kyiv,” Britain’s Ministry of Defence said.

Chernihiv and Kyiv have been subjected to continued air and missile strikes despite Russian claims of reducing activity in these areas, the ministry added.

Russia-Ukraine War: Fuel Storage Unit On Fire In Russian City Near Ukraine Border, Regional Governor Says
A fire broke out at a fuel storage facility in the Russian city of Belgorod located close to the Ukrainian border, regional governor Vyacheslav Gladkov said, two days after the province was rocked by blasts at an arms depot.

Two people were hurt in Friday’s fire, Gladkov said on Telegram, and residents of three city streets were being evacuated.

European Union Is Not Centre Of The Universe: Russia Says Amid Sanctions
Russia will not ask the European Union to end sanctions and has a sufficient “margin of safety”, the RIA news agency quoted a Russian foreign ministry official as saying on Friday.

“The European Union is not the centre of the universe,” Nikolai Kobrinets, the head of the European cooperation department at the ministry, said.


UN atomic watchdog chief Rafael Grossi was in Russia on Thursday ahead of talks the following day with top Russian officials, after visiting neighbouring Ukraine.

Grossi visited a nuclear power plant in southern Ukraine on Wednesday on his first trip to the country since Russia’s invasion raised fears of a nuclear accident.

The head of the International Atomic Energy Agency has repeatedly warned of the dangers of the conflict — the first in a country with a vast nuclear estate.


Russia’s invasion of Ukraine has made John Sullivan’s tough job as US envoy to Moscow even harder as he grapples with the Kremlin’s nuclear saber-rattling and threats to sever relations while keeping his embassy running on one-tenth the normal staff.

“It was really bad two and a half years ago,” Sullivan remembered of his arrival in Jan. 2020. “It’s gotten worse.”

Severe staff cuts imposed by Russia’s government have not yet forced him to clean embassy toilets or buff floors, as rumored in Washington, though he said he knows how to do both.

“They still have superiority in air force, in airplanes and missiles, and we expect to begin to receive super-modern equipment from the United States and Britain to protect our skies and our cities,” Korsunsky told a news conference.

Russia-Ukraine War: War In Ukraine Could “Drag On For A While”, US Says


Russia may be repositioning some of its forces around the Ukrainian capital Kyiv to send them to the eastern Donbas region, where Ukrainian forces have been putting up fierce resistance, the Pentagon said Thursday.

Pentagon spokesman John Kirby also said that Defense Secretary Lloyd Austin has decided to keep elements of the 82nd Airborne Division in Europe for the time being along with an aircraft carrier strike group in the Mediterranean.

Russia has moved a “small number” — perhaps 20 percent — of its troops from around Kyiv after failing to capture the city, which continues to be targeted by Russian airstrikes, Kirby said.


The Pentagon said on Thursday it was not clear that Russia’s convoy of military vehicles to Kyiv, which once stretched some 40 miles, even exists anymore after failing to accomplish its mission.

“I don’t even know if it still exists at this point… They never really accomplished their mission,” said Pentagon spokesperson John Kirby.

The stalled convoy became a symbol of Russia’s battlefield difficulties and had been repeatedly attacked by Ukrainian forces during the first weeks of the more than month-long invasion.

Russia-Ukraine War: Biden Says Putin May Have Put Some Advisors “Under House Arrest”

US President Joe Biden said Thursday that Russian leader Vladimir Putin may be “isolated” and could have placed some of his advisors under “house arrest.”

In his first public remarks on Western assessments about Kremlin tensions over the war in Ukraine, Biden also said he was “skeptical” about Moscow’s claim to be scaling back its onslaught in parts of the country.