At the bottom of a valley, on the road to Giant City State Park, a small boardwalk looks and feels straight out of time. At the north end of the walk, sits a small brick storefront with a yellow wooden board that reads, “OPEN, Makanda Trading Company.” On the sign, an arrow beckons to the door.

Up the concrete steps and past the large flower beds that line the walkway, the door has a golden Masonic Square and Compass and a copper pyramid with the All-Seeing-Eye of the Freemasons laid in gold.

Upbeat cultural music and the smells of homemade soaps, incense, and earthen metals fill the air when one walks through the door. Shelves, tables, and cabinets are placed throughout the store. Each jam packed full of unique rocks, handcrafted wood and metal works, and crystals of all kinds. Customers mill about the store, picking up various items to inspect and show to their fellow shoppers.

Behind the counter, a bearded man opens a rectangle box that houses a ceramic pig, with the different cuts of pork painted on its body. The man’s blonde-white hair is pulled back in a bun, and his fingers deftly open the box with the skill of an experienced business owner. He softly bobs his head to the music as he works.

This man is Brian Beverly, the sole proprietor of Makanda Trading Company. He has owned and run the store for 21 years since he graduated from Southern Illinois University Carbondale.

“And I was like, ‘Ok,’ I mean I had a degree in anthropology, where was I going to work? Walmart?” Beverly jokes.
When Brian was 5 years old, his uncle took him to arrowhead hunting for the first time. Beverly fell in love with the hobby and the history behind it. This love developed into a love for rock collecting and a passion for collecting anything he found fascinating from his travels.

“I first went abroad when I was 14,” Beverly says. Since then, he has been to over 50 countries buying and collecting items to bring back to the Makanda Trading Company.

The process of acquiring these goods is similar, but each country offers unique challenges to getting these goods and getting them back to the United States to be sold to excited customers. Beverly peruses markets usually held on Wednesdays or Saturdays to buy goods from street artists and artisans. Other times and in other countries, he attends festivals. Sometimes they are held for seasons, sometimes for holidays, and sometimes just to have a festival, but all these events have one significant aspect in common: goods can be bought.

“I’ve sat on the back of a scooter and taken way out to remote villages to buy stuff,” Beverly says. “You just never know where it’s going to be at.”

On weekends, two twins work at the shop. Quinn and Aidan Tunison, both 19-year-old men, stand over 6-feet-3-inches tall, with long wavy hair and a vested interest in the shop and its goods.

“We basically grew up on the Boardwalk,” Quinn Tunison says as he carefully straightens a group of golden handcrafted ceremonial knives in a display case.

Quinn Tunison has worked for Beverly at Makanda Trading Company for two years. His brother, Aidan Tunison, started around eight months ago. As children, they spent a lot of time on the Boardwalk and in its many unique shops. Their mother, who also has a passion for collecting rocks and other goods Beverly sells, sparked the interest in her boys for collecting as well. Through this constant exposure and interest in the store and its owner, the twins secured their positions at the Makanda Trading Company.

“Brian has been to about 55 countries to gather all the items here in the shop,” Aidan Tunison says, sweeping his right hand over the display cases and shelves. He pushes a lock of hair behind his ears. “And he’s been here on the Boardwalk for over 20 years.”
Both twins love their job and respect their employer’s work to bring such a unique store to this community.

“It is a very coveted job,” Quinn Tunison says with a smile. His brother nods in agreement. “It is a very unique place and Brian definitely brings an aspect to this community that no one else can.”

But bringing these cultural experiences back to the store to sell is not always easy. Beverly has had things “disappear” through customs agencies and other times had goods flat out stolen from him. He even has had run-ins with the police.

“In Laos, it is illegal to package, ship and sell Buddha (statues) for decorations,” Beverly says, shaking his head in slight frustration, recalling the experience. “Which is strange because they’ll sell them to tourists who do the same thing and that is fine. But you can go to prison for it!”

On this particular trip to Laos, the Laotian police approached him and informed him of this law. When they stepped away, Beverly made his “escape.”

“So I walked- no actually I moved very quickly- down to a boat, and went to Vietnam,” he says.

Vietnam had no such laws prohibiting Buddha from being packaged and sold, and pretty soon, Beverly was back in the United States with authentic Buddha statues to sell to his customers.

“I don’t want to say smuggling, but I guess it was smuggling,” Beverly said with a shrug.

Beverly has had people from all over in the shop.

“I’ve had Japanese tourists, German tourists, and a huge Polish family- I’m talking like 100 family members- come through here before,” Beverly says, taking a handful of assorted nuts from a small bowl on the counter.

The door opens, and he says hello to a mother and daughter who enter the shop. He asks them where they are from, as he always does when customers enter.

“I’m live here but my mother is from the Chicago suburbs,” the daughter says.

“Which one?” Beverly asks. The mother answers and Beverly informs her that he is from Joliet, Illinois. They have a brief chat about Joliet, as well as the local area and some of its history.

Beverly studied anthropology at SIU, and he earned a scholarship to travel to Mexico City while in school and can speak Spanish. He has picked up on other languages in his travels, but just enough to be able to trade with vendors in the countries he finds himself in.

“I usually stay for 1-3 months in these countries and pick up enough of the language to ask for wholesale, reductions, stuff like that,” Beverly says with a nod. “But once I come back it all goes away, until I travel again.” 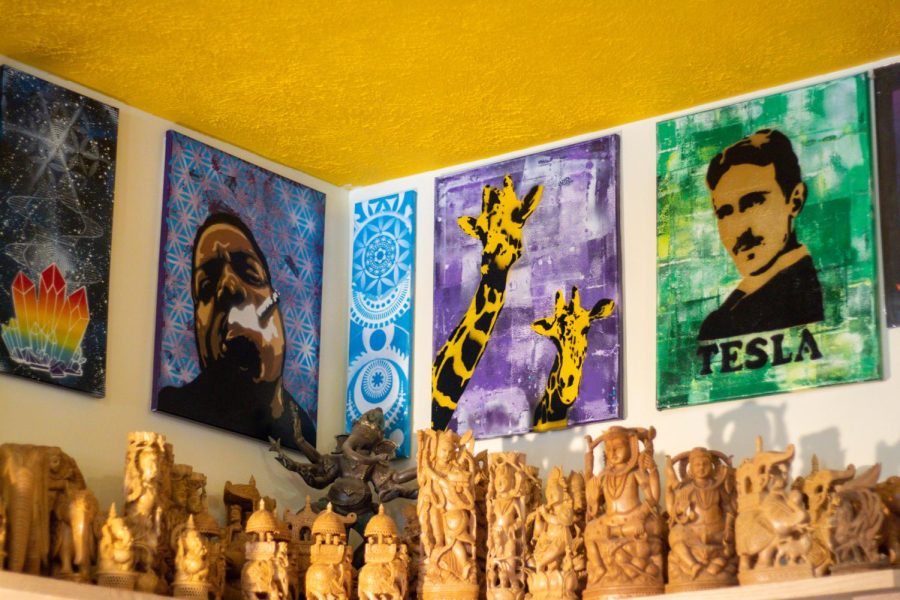 Today’s goods in his store are varied, from expertly carved water buffalo bone and statues of Ganesh to exotic tapestries and tie-dye shirts. But the store initially started with items that Beverly himself found particularly interesting. He has a passion for rocks and crystals because of their uniqueness and natural beauty, which he finds amazing. To him, the rocks are like baseball cards, each is unique, and others are extremely rare.

“Some are super rare- like a Mikey Mantel or something- and some are more desirable like your Jordan cards.” Beverly says. Pointing to a basket on the counter, he continues, “For here the Jordan cards would be like local fluorite, there was mines here until the 90s and people just love it.”

The rocks in the bowl are varied in size and shape. The fluorite is no longer mined locally and has become rare all over. If one can find blue fluorite, which is extremely rare, they could sell it for a very pretty penny.

“These pieces can sell for 3-4 thousand dollars,” Brian says. “And, of course, I cannot get any of it,” he chuckles.

Beverly has a deep passion for all things culture. He loves languages, beliefs, religions, foods, dances, customs, and music. Every year, a music streaming platform called Spotify complies data on each user to curate specific playlists for their listeners as well as provide them with an overview with specific percentages of each listener’s year in music. Last year, he was in the top 1% of listeners who listen to the most varied types of music on Spotify.

A short, stocky man with heavy metal earrings and piercings all over his face enters the shop. He is a regular, and the man explains to Beverly that he is moving into a Pagan temple in Metropolis, Illinois. At this statement, Beverly asks if he would be able to come to visit sometime to see how the temple operates and study their customs. Brian grabs a notebook and jots down the information as the man explains how he can do this. After the man leaves, Beverly sits down in a computer chair behind the counter.

“When I hear something like that, I just have to learn about it,” he says with a smile. “These kinds of things are just so cool and I don’t want to just read about it, I want to experience it.”

The original purpose of the Makanda Trading Company was not simply for Beverly to pursue his passion for culture but to bring the world and its culture to Makanda and the surrounding communities. He wants people who enter his shop to leave with an authentic item that they otherwise only could have gotten if they had made the trip to its place of origin themselves.

Beverly has received some criticism for selling the goods he found on his travels. But he said he has no ill-intentions behind his shop or the things he sells.

“Sometimes now people are limiting things,” he says. “Like, ‘You can’t appropriate culture.’ I’m not even sure I know what that means. It’s good to be conscience of what you’re doing but I’m trying to spread different cultures and ideas and make people be worldly and more so than just in their heads.”

The shop can provide precisely the type of items to pique one’s interest in learning about the world and the people who live in it. The Makanda Trading Company is absolutely a gem, much like the ones sold in the shop, for people to discover and start a flame inside to learn about the world uniquely.

“Like Quinn said, he brings an element of the world to the area that no one else can,” Aidan Tunsion says.

This tiny cultural portal to the world is open seven days a week from 10-5. One will walk through the Masonic Emblemed door into a treasure trove of wonders and stories that people can only experience in the countries they came from, or right here in the small village of Makanda, Illinois. All thanks to Brian Beverly, the man who brings the world to southern Illinois.