(RNS) — The day in April that the first busload of migrants arrived in Washington, D.C., happened to be Holy Thursday, the feast on the Christian calendar that remembers Jesus washing the feet of his disciples the evening before his death.

The Gospel story is about service, of care, the Rev. Sharon Stanley-Rea explained. Stanley-Rea, a Disciples of Christ minister and then-director of the denomination’s Refugee and Immigration Ministries, showed up at a news conference with a basin of water and a towel after that first bus arrived — symbols, she said, of the spirit of welcome she felt the faith community in the nation’s capital was being called to emulate.

And not just Christians, she recalled. Holy Thursday fell during Ramadan, the holiest month for Muslims, and Passover, a major Jewish holiday, began a day later. “Thankfully, from the first moment that the initial bus arrived,” Stanley-Rea said, “I think we need to hold on to the power of, of that timing, as we have continued to see that spirit power, that commitment to service.”

Since then, thousands of migrants have been bused to the city, many without having been told where they were going, others told before boarding that after a stop in Washington they would be able to go on to other destinations where they had family members or loved ones. New York, Chicago and most recently Philadelphia began receiving migrants not long after.

The migrants had been sent north from Texas and Arizona, whose Republican governors, Greg Abbott and Doug Ducey, hoped the mayors of Washington, Philadelphia, New York and other cities would fulfill their promises as being a welcoming city for immigrants so that “overrun and overwhelmed border towns can find relief,” Abbott said in a statement at the time.

The Congregation Action Network, a coalition of more than 70 faith-based organizations formed in 2017 in response to the Trump administration’s “Muslim ban,” had begun providing social services and food during the COVID-19 pandemic. When migrants began arriving in Washington this spring, the coalition immediately began meeting the newcomers’ most urgent material needs.

“You have a lot of faith communities, and groups that were already serving people who are food insecure, or unhoused, kind of well positioned to then transition some of that support to these newly arrived migrants,” said Elias Johnson, director of CAN. 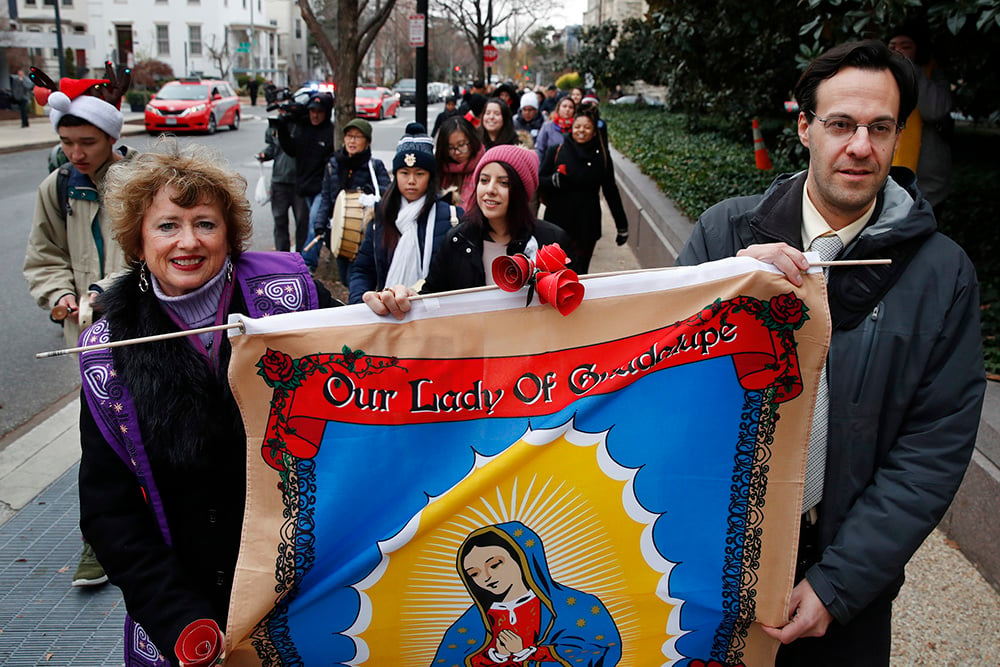 The Rev. Sharon Stanley-Rea, left, and Eli McCarthy, right, hold a banner of Our Lady of Guadalupe, during a march with others in support of the Deferred Action for Childhood Arrivals program through Capitol Hill, Dec. 12, 2017, in Washington. (AP Photo/Jacquelyn Martin)

A rotation schedule was set up in which local churches, synagogues, mosques or other houses of worship opened to the migrants on different days of the week. She estimated that Washington-area faith communities have invested more than half a million dollars in sustaining the migrants in the past several months.

The first face many migrants saw as they stepped off the bus was that of Claudia Tristán, immigration policy director at MomsRising Together, a 16-year-old grassroots organization that advocates for women’s and children’s issues. Tristán welcomed migrants at the designated drop-off locations and explained the resources available to them. She then transported them to one of the respite centers, where the displaced migrants could get a meal and a change of clothes.

Tristán said volunteers continue to support immigrants who decide to settle in Washington. Teams of volunteers organized by the Migrant Solidarity Mutual Aid Network familiarized the new arrivals with the Washington Metro subway system and helped them enroll their kids in schools and enroll themselves in English-language classes.

“There’s a lot of all of this sort of background stuff that is happening, that people don’t typically see or hear about, but it’s a lot of work. And there’s a lot of volunteers that are taking up that work, just to make sure that these kids, their parents are feeling welcomed in their new home,” she said.

Tristán says the organizing efforts in Washington have become a blueprint for other cities. “Chicago and New York, they were thankfully more prepared because they got to communicate with organizers in D.C. about what to expect, what resources they need to make sure they have on hand,” she said.

St. Matthew’s Episcopal Church in Hyattsville, Maryland, on the northeast border of Washington, started housing immigrants when the buses began arriving and has continued to serve as a place of refuge for immigrants coming by bus or other means.

The church, whose congregants are 80% Latino, has offered housing for as long as the immigrants need, as well as food and clothing. Once someone secures a job and housing, the church pays for the first month of rent, if possible, so that the person can start off feeling supported.

The Rev. Vidal Rivas, who leads St. Matthew’s, said that even though the mostly Venezuelan and Nicaraguan immigrants are coming primarily from Pentecostal churches at home, many have stayed in touch with St. Matthew’s and told Rivas they aim to settle nearby because of the care and community they’ve found there.

“A church is going to be a church when it welcomes the poor, the marginalized,” Rivas said. “The only thing that needs to motivate us … is love. Because they deserve love.”

CAN and other faith organizations and advocacy groups have recently been fighting legislation being considered by the D.C. City Council that they say would cause a rift and contribute to tension between unhoused populations in the city who aren’t immigrants and newly arrived immigrants who are also in need of shelter and basic resources.

The Migrant Services and Supports Act of 2022 seeks to codify support for migrants and stipulates that anyone awaiting immigration proceedings at an office outside of D.C. is ineligible to receive city resources that are otherwise available for unhoused D.C. residents — but the ICE field office responsible for D.C. residents is actually in Northern Virginia, and many immigrants bused to the city have immigration hearings scheduled at that office, in Baltimore or at another field office outside of the city itself.

Though the City Council already passed emergency legislation to create an Office of Migrant Services, a public hearing on permanent legislation was held on Oct. 20, and CAN, Sanctuary DMV and other groups voiced opposition to the bill in its current form.

“I think faith communities are really well positioned to try to push back against that to say, ‘Look, these are both populations that we care about, that we serve, that we value and want in our communities. And thus, you need to expand services overall and not exclude these illegal migrants from the services,’” Johnson said.

“I think that we’ll continue to see that faith communities are able to really advocate from that place and bridge some of what otherwise is sometimes a gap in that organizing and advocacy,” he added.

The faith communities and other volunteer groups are more nimble than city government, which only in September created an Office of Migrant Services.

Giovana Oaxaca, the program director of migration policy with the Evangelical Lutheran Church in America, said the human stories of migrants are all too often missing in the political conversation.

Though her work is on the policy side of migrant affairs, Oaxaca hosted a family that arrived by bus from Texas and called it a powerful reminder of why she has dedicated herself to the question of immigration.

RELATED: Debates about migration have never been simple — just look at the Hebrew Bible

“My apartment was filled with the sound of laughter and music. I was cooking arepas with my guests. They also opened up to me about their experience, telling me about the hardships they had endured, their determination, and, of course, the disorientation they were feeling having arrived to Washington, D.C., with the bags that they could carry with them, essentially,” she recalled.

“Just having that personal encounter with this family felt like it was a reaffirmation of what policy is trying to do right. If the experience for them had been so dehumanizing … connecting to them at that individual personal level felt like a return to what values we speak of when we talk about a more just, a more humane immigration system,” she said.

Stanley-Rea, noting that “our Scriptures call us to welcome the vulnerable, to be the balm in Gilead, to offer healing to those who have been traumatized,” said that healing cannot come only from handing out benefits. “It’s got to also come through relationships, it comes through prayers, it comes through the sharing of hearts and the warmth of friendship,” she said. “And all of those are special strengths and gifts I think that faith communities have to offer.”

Who is Trump and Kanye’s dinner companion, Nick Fuentes?