(RNS) — Imam Mohamed Magid, the executive religious director of a Northern Virginia mosque and a leader in interfaith relations, has been appointed to the U.S. Commission on International Religious Freedom.

Magid said he received word from the White House that his appointment was official as of Wednesday (Aug. 10).

The bipartisan commission, an independent watchdog, issues an annual report on global religious liberty and deterioration of human rights. Its members take fact-finding trips and make recommendations to the State Department about which countries are the worst religious freedom violators.

President Joe Biden announced his intention to appoint Magid as a commissioner on July 1, and Magid said then he was “honored and humbled.”

“It is indeed a divine privilege to work together with others to ensure that every person has the right to freely practice their beliefs,” Magid, 57, said in a statement posted on his Facebook page at the time.

He succeeds Khizr Khan, a Gold Star father who recently received a Presidential Medal of Freedom and who served as a commissioner from August 2021 through May 2022.

“We very much welcome the appointment of Mohamed Magid to the Commission,” Turkel said in a statement. “His breadth and depth of experience on a range of international religious freedom issues will be a tremendous asset to USCIRF going forward.” 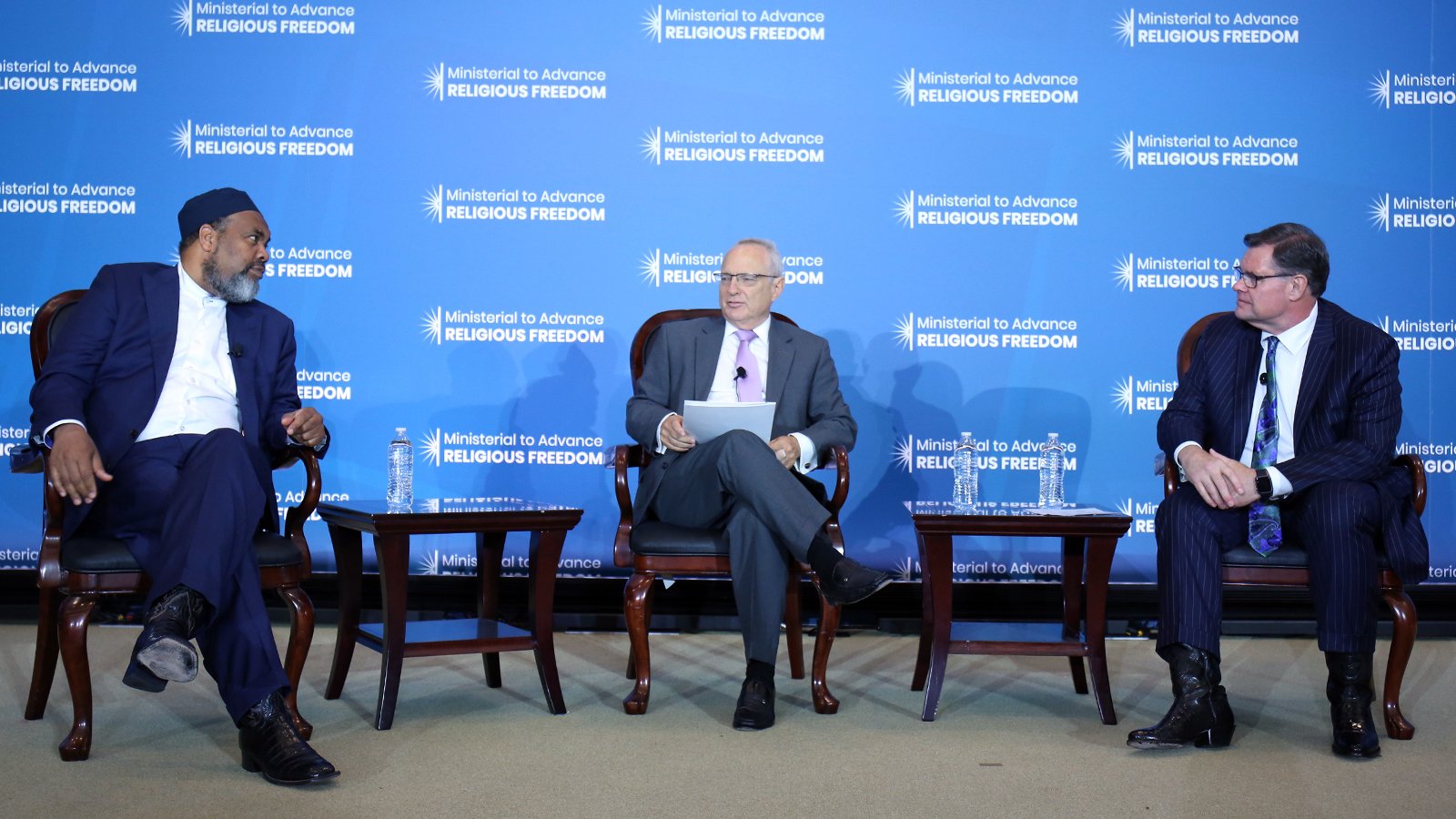 Imam Mohamed Magid, from left, Rabbi David Saperstein, and minister Bob Roberts participate in a panel discussion on Different Faiths Advancing Religious Freedom Together at the Ministerial to Advance Religious Freedom at the U.S. Department of State in Washington, D.C., on July 17, 2019. Photo by U.S. State Department/Public Domain

Magid, a native of Sudan, is the executive imam of All Dulles Area Muslim Society Center and has worked with the United Nations Development Programme to train imams dealing with extremism and violence against religious minorities in West and East Africa.

A former president of the Islamic Society of North America and current co-president of Religions for Peace, Magid has played a key role in numerous declarations and dialogues bringing together global leaders of different faiths, including the 2016 Marrakesh Declaration, unveiled in 2016 in Morocco.

“I hear other people’s perspective and then we can come away with a common understanding of what’s unique on an issue,” he told Georgetown University’s Berkley Center for Religion, Peace, and World Affairs in a January interview. “The challenge is to ensure that out of our discussion or conference somebody will say, ‘We want to take this to the next level.’”

Magid also is the co-founder of the Multi-faith Neighbors Network, which seeks to foster relations between evangelical Christian, Jewish and Muslim communities, and recently was named a thought leader with Interfaith America’s Vote Is Sacred initiative.

RELATED: Faith and the COVID-19 vaccine: ‘Muslims were among the first to believe in vaccines’

The Lumineers – Sleep On The Floor (Official Video)

At 75, Pakistan has moved far from the secular and democratic vision of its founder