Looking for a path to freedom, I follow my tingling feet


(RNS) — There’s something about American soil that makes my feet soles crawl, and not in a good way. I’ve come to know this feeling as my body’s way of signaling danger. It’s my body’s way of sending a very simple message: “Run!”

The first time I noticed this somatic memo was in a racially hostile workplace. I’d find myself slumped over my steering wheel on Monday mornings, driving to work as slowly as possible, anticipating what microaggressions I’d endure that day. The day I quit that job — without any savings or backup plan — my feet had been tingling all morning. By the end of the month, I’d landed a remote job for a faith-based, social justice organization led by a woman of color — a seemingly perfect role for me.

Thank God for tingling feet. Apparently, the body does more than keep score, as they say. It points the way forward.

The next time I remember them tingling was in the fall of 2020, when I stepped off the escalator at LAX to claim my bag. I’d fled the anti-Black violence in America, going to my family’s home in Montego Bay, but had come back because a man in my old neighborhood had been shot in the back by local police. My activist friends said they needed me.

RELATED: Kendrick Lamar’s new album reminds us that even prophets are fallible

For a month now, my soles have been crawling again. The tingles were especially strong this week, when I finally went to Ralph’s to buy groceries — I’d been having them delivered using Amazon Fresh. As soon as I stepped into the store, a wave of electricity ran from heel to toe, one word flashing through my mind: “Buffalo.”

I calmed the tingling, telling myself that it’s unlikely that a mass shooter would invade an Inglewood grocery store. But for a month I’d had the countervailing thought: “That man drove 200 miles to Buffalo to shoot Black people. Does that same spirit of fear live within a 200-mile radius of Los Angeles? Probably.”

It’s not for nothing that Central California, 200 miles north of my Ralph’s, is known to locals as “Calabama.” Some have argued that California is ground zero for America’s “great replacement” ideology — the same notions set down in a manifesto by Dylann Roof before he committed the Mother Emanuel Church massacre in Charleston, chanted by torch-wielding Charlottesville protesters, repeated in the Buffalo shooter’s Discord posts and believed by half of Americans today.

How do people live fully under the threat of this kind of violence? We can’t be sure we are safe while at home playing video games, going for a jog, worshipping at church or picking up groceries. During Jim Crow, how did people work, marry and raise families under that regime of terror? Were they not haunted by the possibility that they could be lynched that day? I’ve been asking people alive long enough to remember, but their responses have yet to stop the tingling in my feet.

The tingling has subsided a couple of times recently, for a few hours at a time, at the closest thing I have to home in the states these days: a tiny tavern on the Upper West Side of Manhattan called Ashford & Simpson’s Sugar Bar. 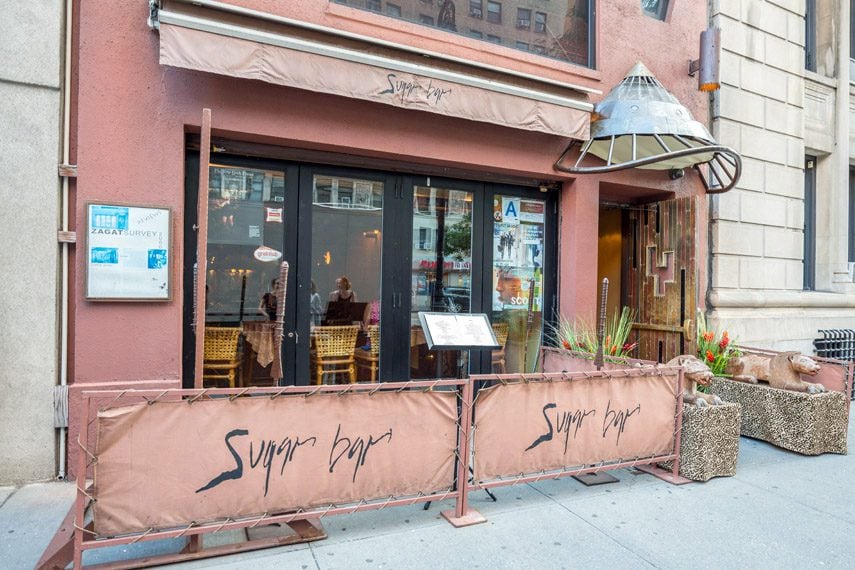 Dubbed the “Shangri-La of the Upper West Side” by Vanity Fair, Ashford & Simpson’s Sugar Bar has been somewhat of an urban hush harbor for decades. Its founders, the legendary Motown songwriting duo Valerie Simpson and her late husband, Nick Ashford, penned Marvin Gaye and Tammi Terrell’s “Ain’t No Mountain High Enough” and Chaka Khan’s “I’m Every Woman,” among other iconic pop songs. The little bar still attracts a pantheon of pop culture heavyweights.

And me. When I newly arrived on Manhattan’s underground R&B scene, starved for affirmation, I found encouragement at the Sugar Bar in the praise of Maya Angelou and the embrace of Quincy Jones. Once Andre Leon Talley defended my style of dress against a couple of heckling patrons. Ashford and Simpson themselves became champions and mentors of my art.

You might be wondering what the hell does a watering hole for Black artists founded by Motown songwriters have to do with finding peace in the current fascist counterrevolution. Well, for one, it encapsulates the kind of diversity that great-replacement adherents fear will one day become America’s common sense, a place where truth and love obliterate the dividing lines of class, gender and sexual orientation.

Furthermore, founded in 1959, Motown is one of many Black music institutions that soundtracked the civil rights and great migration eras (1910-1970), where the tingle of danger sent thousands of Black feet marching in the streets and traveling to new regions of the country in search of better economic opportunities and safety — and dancing in watering holes in Black communities where they could have joy and love in spite of their ongoing persecution.

The Sugar Bar is continuing that tradition to this day, offering respite to an entirely new generation of Black people living under the attempted resuscitation of Jim Crow.

Earlier this month, sitting in front of a candlelit dinner of mac and cheese, collard greens and lamb chops, just a few seats down from Ms. Simpson, I forgot all about the threat of white terrorism for a moment as Nia Drummond, that night’s open mic host, took the stage.

“It’s Black Music Month,” she said before launching into “Somewhere Over the Rainbow.” Her silky voice glides overhead, through a breathtaking performance that would’ve made Judy Garland think twice before daring to sing that song again.

For a few minutes I began to think the answer to how we live well despite the threat of white terrorism was that we use art to escape. Then Drummond’s performance turned prophetic. “Somewhere out there,” her voice trembled, “Nick Ashford sits peacefully with the ancestors.” Hand silhouettes wave back at her through the spotlights in agreement. Shouts of “amen” shoot past my ear from the darkened bar.

“Somewhere out there,” her voice swells, “children in Uvalde play without fear of bullets.” Tears flow down my cheeks as I am lifted from my chair. With each spontaneous sung phrase, the difference between the Sugar Bar and a sanctuary becomes harder to discern.

At the beginning of Psalm 46, before readers can take solace in the comfort of the psalm’s comforting lyric, “God is our refuge and strength. An ever-present help in trouble,” there is a footnote: “For the director of music. Of the Sons of Korah. According to alamoth. A song.”

This bit of ancient metadata tells us that this song of comfort is set to a familiar melody, probably a melody used in many other songs, just as civil rights leaders of the 1950s and ’60s adapted familiar church songs and made them about freedom. Some scholars suggest this psalm was probably sung by a single soprano voice as part of temple worship. I imagine exhausted, harried ancient people dragging themselves to Temple and receiving the performance of this psalm as a balm.

After Nia’s performance, I find myself in the arms of another patron in tears, because someone named the truth with a song of hope. They rub my back in their embrace. Their hands say “I know.”

Award-winning singer-songwriter Clayton Bryant takes the stage next and, saying in the mic that Nia has set a tone he doesn’t want to break, sings Aretha Franklin’s “Spirit in the Dark,” and takes us all the way to church.

What’s left of my lamb chops has gone cold as I dance in the aisle with other parishioners, as the music evolves from the spiritual songs back to secular classics like the Gap Band’s “Yearning for Your Love,” but the spirit of communal connection, truth-telling and lament, and hope, abide. Although Black people have fled to all kinds of places, domestic and abroad, for safety from white terrorism, Black music has also been a refuge for us. My feet are tingling but the tingle is transformed into dance.

In Advent, we hope and wait. Climate change doesn’t lend itself to either.